The 1956 The National Interstate and Defense Highways Act impacted lives and cities across the United States by constructing what we now call the Interstate Highway system.  Planners of the system routed some highways, often purposely, through vulnerable and deprived neighborhoods occupied by people of color. Once thriving and full neighborhoods, these neighborhoods were split and, in some cases, even fully demolished for these urban highways. Within the span of a few years these neighborhoods lost not only homes and people, but shops, jobs and their vitality. This caused an economic downturn in many of these neighborhoods that lasts until the present day. Remaining residents still live with the negative consequences of these highways, including disconnections, poor air quality, noise and road trauma.  Some of the most impacted neighborhoods in Columbus include Hanford Village and Bronzeville on the east side, and Flytown just north of downtown. 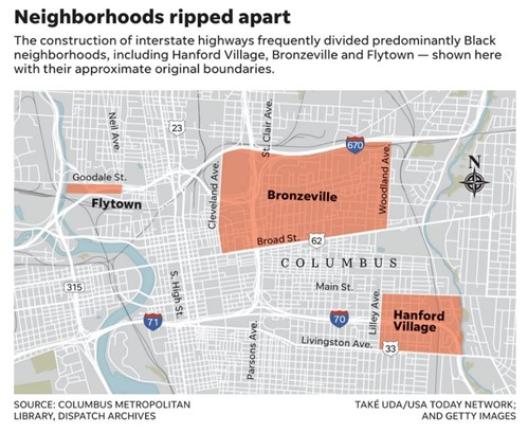 Hanford Village is a good example of a neighborhood heavily impacted by highway construction. This was a vibrant community for newly returning Black World War II veterans. Hanford Village’s George Washington Carver Addition was platted in 1945. 146 homes were constructed during 1945-1947. Currently, the neighborhood is only a small fragment of what it once was. The construction of Interstate 70 and Alum Creek Drive demolished or moved 67 of the homes in this subdivision. 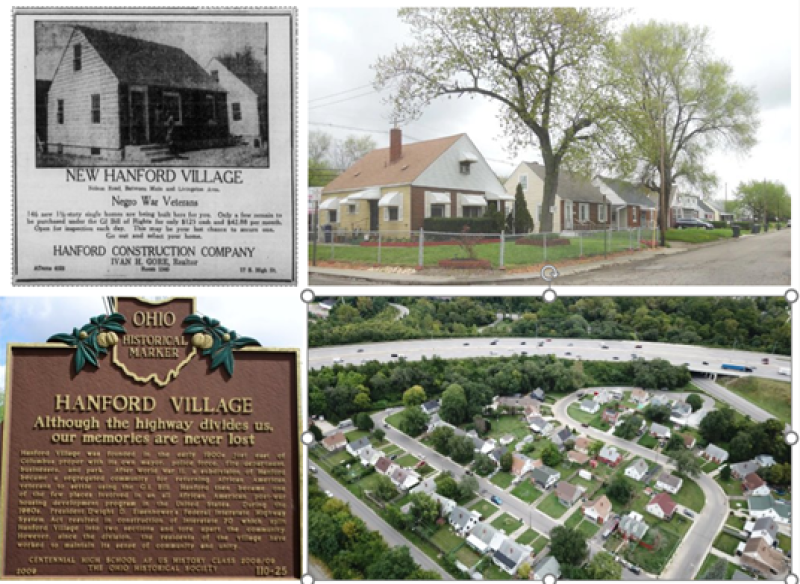 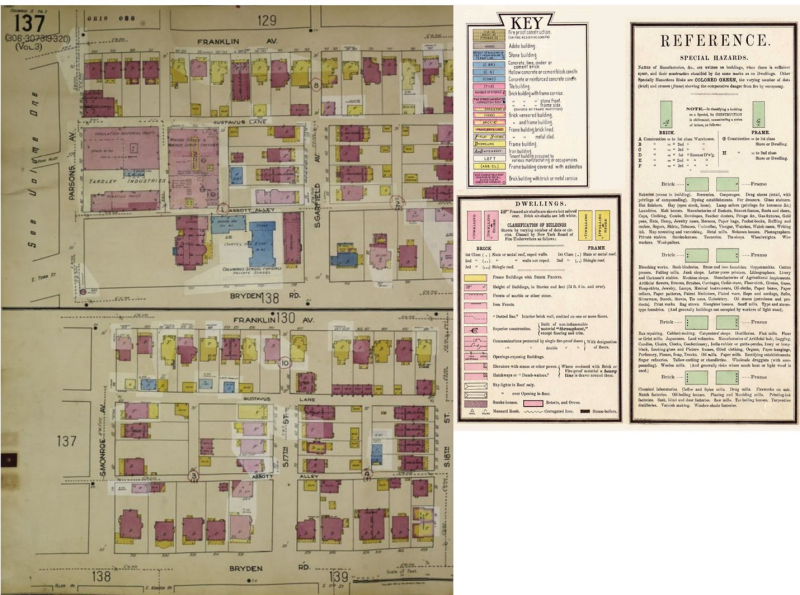 Sanborn Fire Insurance map. The left side shows streets and buildings on the east side of Columbus in 1961. The legend on the right side illustrates the rich information available in these historic maps; some date back to the 1880s.

The Ghost Neighborhoods project will highlight these lost and damaged neighborhoods by using machine learning/artificial intelligence techniques to extract data from the Sanborn maps to create populate a GIS database, allowing the creation of 3D visualizations and support spatial analysis. The 3D visualization will show existing and demolished structures. The figure below shows one of the first visualizations produced by the research team: buildings in Hanford Village in 1961.  The blue double lines show what is now I-70, and the red buildings are those that were destroyed by its construction. 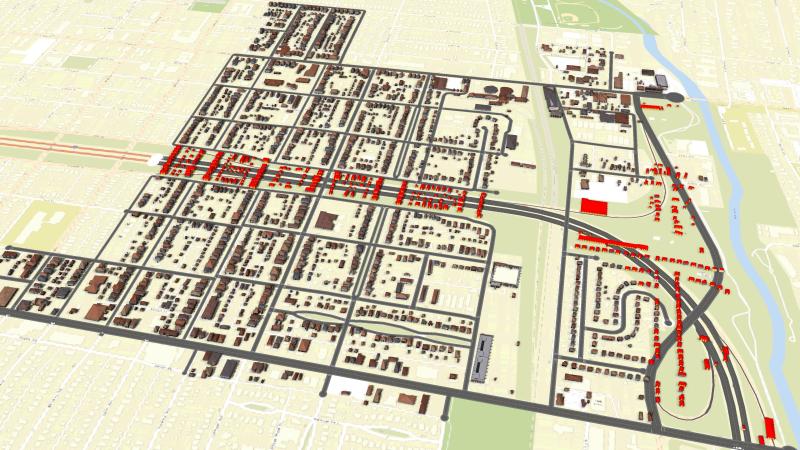 This image shows the Hanford Village and Driving Park neighborhoods in 1961. It also shows the modern-day I-70 highway, and the buildings destroyed or relocated for its construction, highlighted in red. The project is also gathering historic photos, archival documents, and narratives to create story maps that will tell the tales of neighborhoods lost to highway construction.

The team will also be doing archival research to gather and georeference historic photographs, narratives and other archival material that can bring these lost neighborhoods to life in a story map format.  We will also be linking these building data to historic city directories that contain owner and business information organized by street address.

The Ghost Neighborhoods team is starting with Hanford Village but will move on to Bronzeville (including the Mt. Vernon Ave corridor) and Flytown. We also plan to conduct a similar effort for the Franklinton neighborhood across the Scioto River from downtown, prior to the devastating flood of 1913. Eventually we will scale this up to other cities in Ohio and elsewhere in the nation.

Columbus Dispatch: Columbus neighborhoods cut up by freeways being reimagined by Ohio State researchers in 3D