Who still needs public transit during the pandemic? Essential workers, minorities, and seniors

Who still needs public transit during the pandemic? Essential workers, minorities, and seniors 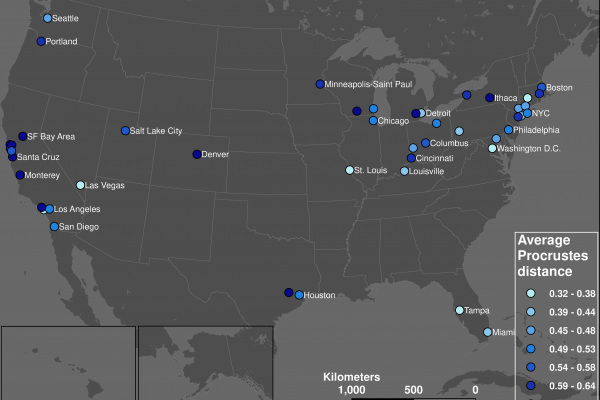 COVID-19 became a global pandemic due to its contagiousness, fatality rates, and lack of effective vaccines or treatments. Public transit is particularly vulnerable to disruption and shocks from pandemics due to the collective nature of its mobility, as news articles and preliminary reports from transit agencies suggest the demand for transit has significantly decreased due to COVID-19. Declines in transit demand are also unequal across social groups; for example, many information, managerial, tech, and knowledge workers can work from home while people with jobs that demand physical presence still need to travel to work. However, the differential impacts of pandemics on public transit demand is still an underexplored question.

In this study, we use the data from the Transit app, a popular mobile phone-based transit planning app, to conduct a systematic analysis of the impacts of COVID-19 on 113 public transit systems across the United States. We fit logistic curves to describe the decline in daily transit demand across public transit systems. We use regression analyses and online survey results to relate the transit demand during the pandemic to socioeconomic and demographic factors in each community. We also compare the distance between the demand decline and the first date of local community spread to measure whether public transit users in different metro areas reacted at different speeds to the unfolding pandemic. Finally, we use hourly transit demand data to capture COVID-19’s impact on daily patterns of transit demand.

This paper is a first approximation for understanding the differential impacts of a major pandemic such as COVID-19 on public transit systems in the United States. Our results affirm a stark fact: cities with more essential workers and a more vulnerable population tend to maintain higher transit demand levels during COVID-19. This moreover suggests the necessity of the transit system during a pandemic when transit systems lose a great deal of discretionary demand. This should motivate transit planners, policy makers, political leaders, and taxpayers to rethink the role of transit systems not as a business, but as critical infrastructure for a community, especially for some vulnerable and underprivileged social groups (women, Hispanic, African-Americans) as they travel to perform essential activities.

The results of response intervals moreover reveal that the passengers of most transit systems did not react fast enough to avoid the local community spread of the COVID-19 pandemic. Our results also pointed out that transit users’ response times were not synchronized with the evolution of the pandemic, but with the local community’s actions and policies. This moreover proves the role of local authorities during the pandemic.