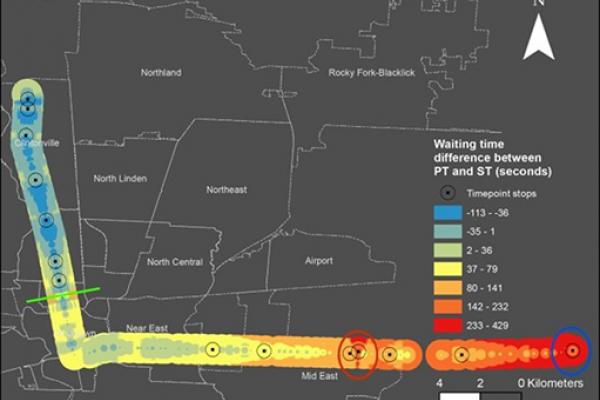 A common belief about real-time information (RTI) is the reduction of waiting time by allowing passengers to appropriately time their arrivals at transit stops. However, we find that this may not always hold true after investigating real-time transit data for one year (2018 - 2019) in the bus system of the Central Ohio Transit Authority (COTA) in Columbus, Ohio. We theorize and validate two sources of RTI-based users’ waiting time penalties: bus drivers compensating for being behind schedule and discrepancies between RTI updates and reality. We benchmark four typical common strategies for both RTI and non-RTI users and calculate their average waiting time and risk of missing a bus.

Our results do not support the claims that RTI can always reduce waiting time. 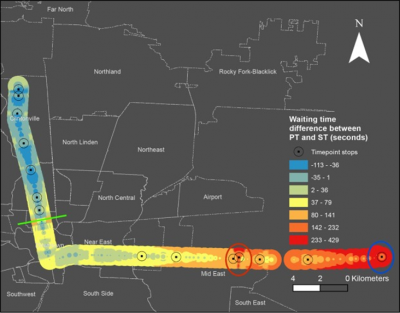 This study provides valuable insights for transit users, planners, public transit agencies, and real-time transit app providers. Our results suggest that real-time performance data under the risky algorithm design is not sufficient: more public transit agencies and RTI apps should also consider historical data to gauge the veracity of the RTI in reducing waiting time based on spatial and temporal context. Users should also have the option of specifying different trip planning strategy, including prudent strategies with pre-calculated optimal time buffers. The techniques and measure we develop in this paper can help support a more holistic and sensitive approach to public transit RTI.

Check out the full academic article in the link below!