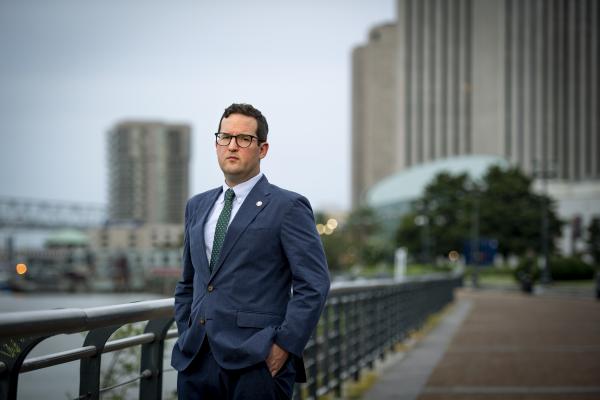 This lecture maps out the emerging economic geography of risk that is driving the adaptation of real estate, housing, muni bond and capital markets. The lecture will explore the proposition that private sector adaptation is outpacing and dictating the terms of public sector adaptation in the built environment. This proposition will be explored through recently published observational evidence, as well as emerging trends associated with the integration of financial regulation and climate change. The lecture will conclude with the identification of collateral impacts from market-based adaptation on social vulnerability and behavior, including climate gentrification and climigration.

Jesse M. Keenan is an Associate Professor and social scientist within the faculty of the School of Architecture at Tulane University in New Orleans, Louisiana. As a globally recognized thought leader, Keenan’s research focuses on the intersection of climate change adaptation and the built environment, including aspects of design, engineering, regulation, planning and financing. Keenan holds concurrent appointments as a member of the U.S. delegation to the Intergovernmental Panel on Climate Change (IPCC) and as an appointed member of the U.S. Global Change Research Program for the 5th National Climate Assessment. Keenan formerly served as the Area Head for Real Estate and Built Environment on the faculty of the Harvard Graduate School of Design and as the Research Director of the Center for Urban Real Estate on the faculty of the Graduate School of Architecture, Planning and Preservation at Columbia University. Keenan current serves as an Honorary Research Associate and Fellow at Oxford University’s Smith School of Enterprise and the Environment. Keenan’s research has partnered with a variety of global actors, including the AIA, Audi, Carnegie Corporation, City of New York, EPA, Goldman Sachs, Google, ICC, Knight Foundation, MoMA, Mori Foundation, Lennar Foundation, NASA, National Security Council, National Institute of Standards and Technology, National Science Foundation, Open Society Foundation, Regional Plan Association, RAND Corporation, States of California and Massachusetts, the White House and the U.N. Keenan’s books include Blue Dunes: Climate Change by Design (Columbia University Press), Climate Change Adaptation in North America: Experiences, Case Studies and Best Practices (Springer) and Climate Adaptation Finance and Investment in California (Routledge). Keenan holds degrees in the law (J.D., LL.M.) and science of the built environment (M.Sc.), including a Ph.D. from the Delft University of Technology.